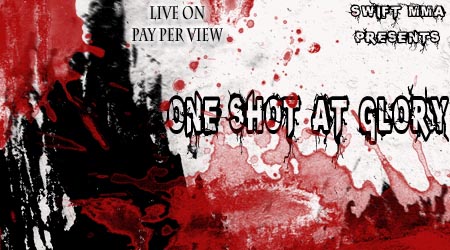 The time has finally come! The moment all Mixed Martial Arts fans have been waiting for! SWIFT MMA Proudly presents: ONE SHOT AT GLORY! Live from the HP Pavilion in San Jose, California!

This card features four fights plus one MAJOR announcement! The new comer to The Cage Ryan McDounough will take on Bobby Walker who was submitted by Jonathan Marx in Retaliation Five, will Walker suffer the same fate or overcome The Iron Wrench?

Two SWIFT: MMA new comers will test their skills against one another as Kevin Mason goes one on one against Alexander Benson.

Akeem Winters showed MMA fans that he is no joke with his win against Mike Konda, but will his winning streak continues, or will the vengeance seeking Grim Reaper Liu Kuan welcome him to a new world of pain?

And in the Main Event….two fighters have proved their worth in SWIFT: MMA to be brought to the next level, a chance to win the SWIFT Championship! Four and zero Jonathan Marx will fight two and zero Landon Price in the first ever SWIFT Championship fight! Can Marx end the fight early as he has so far in SWIFT? Or, will Price a conditioned and highly dangerous athlete end Marx’s gold streak run?

MAIN EVENT FOR THE SWIFT CHAMPIONSHIP: